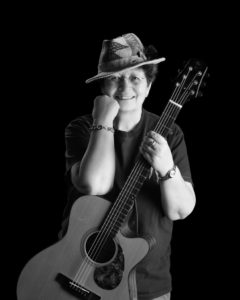 Vanessa Craven, an Anglo-Indian of Welsh-Indian background, is an Australian singer songwriter and multi-instrumentalist. She has been passionate about guitar playing since her early teens in India. Immigrating to Australia from the Himalaya Mountains ,she studied theology, served in the Australian Army Reserve, served as a volunteer with the police search and rescue, worked as a librarian,  having completed her qualifications in India, and played music as a hobby. She studied Contemporary Music at the Australian Institute of Music, Melbourne. She is also a keen  photographer, artist, poet and short story writer.Since 2009 she has played her music in a variety of events and venues such as  Cresfest, Creswick Vic. Newport Folk Festival,Girgarree Moosic Muster  the Denny Roots and Blues Festival R.S.L.Deniliquin, Newstead Folk Festival, Castlemaine Fringe Festival, Daylesford Folk and Blues Festival, Ballan Autumn Festival, Strawberry Festival, Bacchus Marsh, Brunswick Festival, along with a variety of venues ranging from art galleries, pubs, cafes, vineyards, retirement villages, aged care facilities and more in Country Victoria,Melbourne and suburbs. Check the ‘Past Gigs’ for details.

She moved to Daylesford permanently in 2009 and being passionate about living in an Eco-friendly environment, she built a rammed earth house. She has contributed to the Daylesford Community, by organising and running the Daylesford Folk and Blues Festival from 2010 through to 2013 and also ran a regular  Open Mic  2009 through to 2015.

Vanessa is attracted to folk,blues,jazz, Latin and alt-country styles of music and continues to explore other genres as well.These influences are reflected in her performances. Her music has been influenced by listening to classical music with her father when she was a child, and more recently by Bob Dylan, Ry Cooder, Jerry Douglas, Kristina Olsen,Nick Charles, Pete Fidler, The Beatles, Chris Smither, Bob Brozman, Harry Manx, Kate Campbell, Janis Ian, Debashish Bhattacharia, Eric Bogle, and Glen Cardier ,to name a few.

She currently plays guitar in open and standard tuning, as well as a lap-slide. She also surprises listeners, by throwing in a touch of didgeridoo in some songs in order to add atmosphere and colour to her music.She is a multi-instrumentalist and plays  cajon drum, floor tambourine, and harmonica, along with an electronic percussion rig.

She is also involved in playing as a duo in Sugar ‘n Spice and also in her band called Lunar Dust, and also performs as a ‘one woman band’, playing guitar, stomp, harmonica to accompany her smooth easy listening vocals.More recently she has formed another band in 2022 called Lake Mist which performs as a duo or trio as required.

In 2019 the 3rd. CD “Homebrew”was produced. The entire CD being performed by the duo ‘Sugar ‘n Spice. Zdena Schwangmeier on Uke Bass, Vanessa Craven on guitar, harmonica, percussion and vocals. It is in the process of being launched through 2019 at the following places and venues : Girgarre Music Muster, Blue Bean Love Cafe, Hepburn, Scrub Hill 1869, Newlyn and more venues to come.